It’s never easy saying goodbye to the place you called home. While the Philippines is fantastic (the food especially is to die for), home is not the place you grew up in, but the people you care for that make a place home. The realization you’ve left those people behind can hit the hardest months down the line as it did for me. I was staring out the window of the library as I studied for an exam. My mind was overloaded as information swirled over the screen. Outside, I saw a deer grazing amidst the pack of parked cars. I found it hilariously random and got the urge to tell my friends about it. Then it hit me, the time difference meant they won’t see it until hours later. I won’t be able to meet up with them at the bar and just tell them about my random life events. That moment of being alone at the library just brought me back to how I felt right before I left.

The last 24 hours before my flight was a peculiar mix of feelings. Elation, fear, and anxiety melded together and formed an emotional hodgepodge soup simmering in my thoughts. Had I packed everything I needed? Maybe I forgot something important? What if something goes wrong? It was a struggle to keep those panicked thoughts at bay. I somehow managed to keep calm and distracted myself with whatever I could, like the fantastic idea of beating a 120-hour game before a flight (that is a true story). Regardless of the distraction though, I felt nervous and uneasy. I had everything prepared, I even spent the last month giving my goodbyes to family and friends. 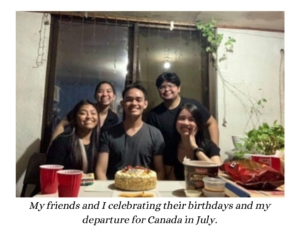 It started with my college friends. We spent a whole evening at my house. We celebrated their birthday (All three of them had their birthday in the same week) and my departure for Canada. For an evening, we seemingly turned back the clock to our college days as we ate, drank, and swapped stories until dawn. Each person gave one last heartfelt goodbye as they left. Hugs were freely passed around. It stung knowing we weren’t within traveling distance of each other when one of us needed a night out to relax or rant about our lives. Life choices can suck in that regard.

Next were my high school friends. They visited me the week of my departure. We went to this overlooking eatery that was just a 15-minute car trip from my house. We all joked around like our high school selves would. They told me how they found out about that place through their friends who enjoyed biking up mountains. We stayed up there for as long as we could, just sitting in a Bahay-Kubo (an open-air cabin) that overlooked the city while we ate cheap ramen bowls sold by the eatery. It was interesting finding a place so captivating right before leaving. It made me wish at the time we headed up there more often. 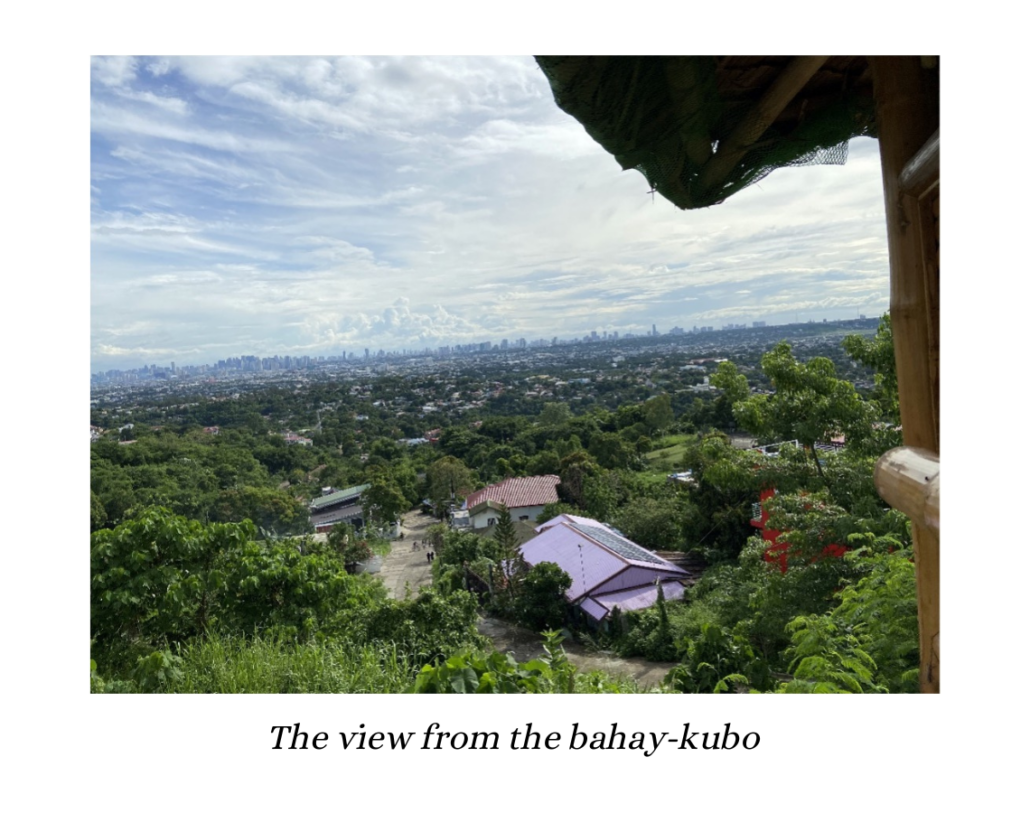 The next round of goodbyes was my family. The day before I had to leave, we had a small party at our house. My aunt loved food. She’d always tell us about great restaurants around the city. On weekends we’d always have ourselves a feast trying out different cuisines (nothing beats Japanese cuisine and ramen nights though). On the day I left, she ordered from this restaurant and brought it to the house. I mostly remember how fantastic the truffle mushroom rice was. I stuffed myself silly, basking in the final moments I would be living at my old house. The chipped white walls (that may or may not have been my fault), individual wooden floor tiles (that I’d always kick out of place), my grandma’s collection of ceramics stored behind glass doors (that I’ve been enamored to play with for the longest time), and this giant fabric artwork of the last supper we’ve had since I was a child hanging by the glass dining table (that I would always mindlessly stare at, it was huge).

Across the table sat my grandma. She wasn’t the emotional type of person, but she was a caring grandma who we loved being around and can cook up some fantastic food. On that day, she was complaining about who will help her out now with her when her TV or phone would malfunction. She also asked who’ll order her iced coffee in the afternoons (I never paid for the coffee, but I loved taking credit by always handing her coffee). It was her way of saying she’ll miss me. I do miss her as well. On certain days, I find myself craving her cooking, like her recipe for Dinuguan or Nilaga. I reminisce about our little routines, hiding behind the door to scare her after a smoke or waking up to a glass of taho in the fridge that she bought for me in the morning. Writing about it now does bring me back to a melancholic place. Some days, I vividly picture myself waking up at that house, walking down the stairs to have my grandma greet me for lunch or my mom bugging me with affection or ordering some iced coffee for us. The mental image I have of that childhood home will always house those dear memories to me.

As I approach the last 12 hours, one of my friends managed to bike up to my house (which was at the top of a steep hill, so props to you, Jerald) to say farewell in person. Jerald has been one of my closest friends since kindergarten. It felt appropriate he was the last one to send me off. Aside from that, I managed to get one last stowaway from my first college friend, JC. We both had an affinity for Starbucks as our comfort coffee place during college, which made it hilariously befitting her parting gift to me was this Starbucks stuffed turtle bear I’d affectionately named Burtois (because he’s a tortoise-dressed bear barista, get it? it’s a bad joke). Burtois was my travel partner for this big journey in my life and he’s been a beary good companion ever since. He stands for all my bad jokes and that’s where it matters (and no, that’s not because he can’t speak). As we arrived at the airport drop-off, my nerves and excitement shot up. I was so close to getting on the plane and experiencing new things across the globe. But no matter how ready I was, saying goodbye to my mom was probably the hardest part of it. 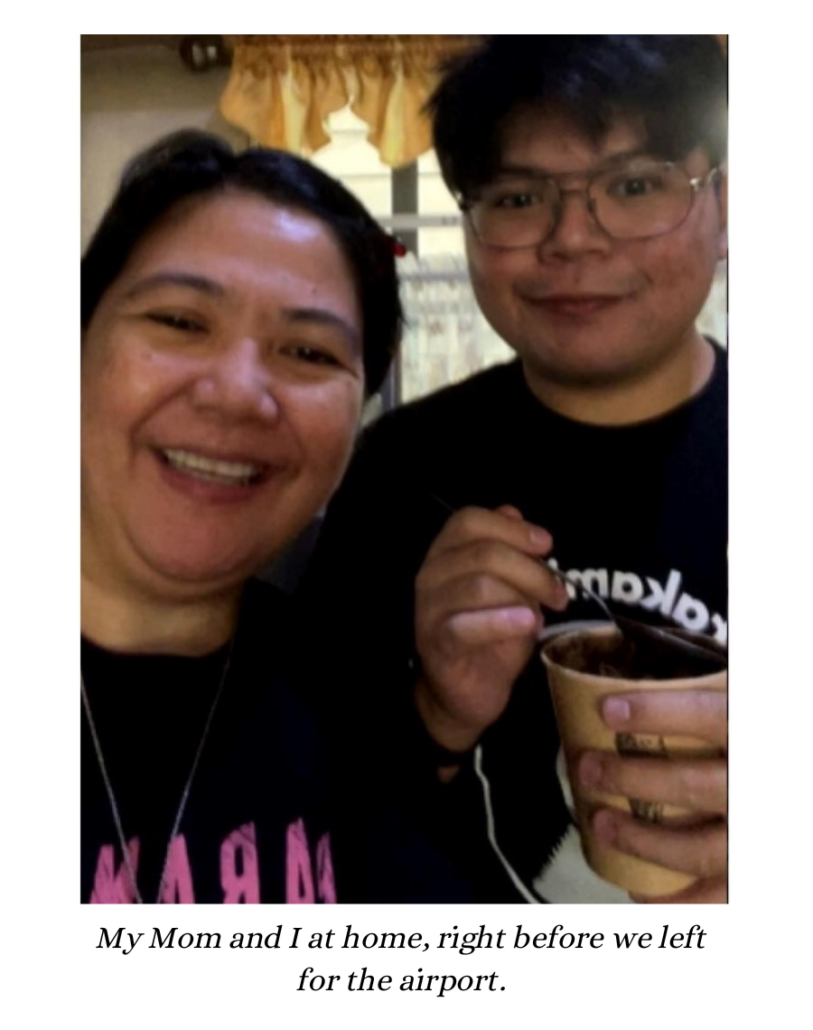 My mom and I have been inseparable since I was a kid, my first ever memory was my mom waking me up for kindergarten. My passion for video games started when my mom introduced me to Final Fantasy VIII as a kid and that game is still our favorite game. On weekends, my mom and I would usually head out either to meet my aunt and go shopping or eat. During the worst moments in my life, I knew I could always be open to my mom, and she would never judge me. She was always just a caring ball of energy whom everyone loves being around. She’s been the biggest reason I took the leap; She always taught me growing up to chase after my dreams. When I felt lost about which college course to take after high school, she told me to trust myself. To pick the path that would make me most happy. While that path didn’t pan out, she never held it over me. Instead, she told me it was ok to start again. Pick where I’ll be happy and able to chase my dreams, which ended up being here. It might’ve just been a couple of minutes to say goodbye, with no speeches or tearful goodbyes being said, but it was bittersweet leaving my mom there. It was hard to go off to the airport doors alone, but it’s a part of growing up. some paths just temporarily lead us away from people we care for, but that won’t be the end of those relationships.

So, what was this dream? It was to be a writer and make a career of it. That dream led me to study abroad. Writing about something personal is endearing and painful. I found it difficult to dig through old memories of an inaccessible place. Vividly relieve those fleeting moments with those I care for. The more I write though, the more I started to feel happier to have those moments to look back on. Little memory capsules I know I experienced with memorable people.

Going back to the library, I did feel alone at the time. The distance can get to you sometimes as it will never be easy saying goodbye to home, nor should it ever be easy. Those connections are special, and the distance only creates a small nuisance. It may have been an end of an era where we lived close to each other, but it doesn’t mean I can’t keep in touch. The time difference sucks but I find ways to text my friends all my deer-sighting thoughts. We also get together for some video calls here and there. Usually when they’re out at night. I drink coffee while they have alcohol. It’s hilarious. For my mom, it’s the semi-daily text updates or hour-long calls on weekends. My grandma and aunt show up sometimes on the calls. I may not be there physically, but I still find ways to make sure they’re part of my life.

The other way I get past that feeling of loneliness is I’ve managed to make a second home in Canada. The first year was blissful and rough. There were so many memories that made me feel on top of the world. My first hike in Banff (a 6-hour hike is still not a beginner trail), my first published paper in the Agora journal, and most importantly, making my first friends at RDP (Kiru, Tim, Mark, Runmar, Gie, Rodrigo, Cori, Ais, Wyatt, Oliver, Bruno) and the summer nights I spent with them dancing, playing pool, and eating wings. 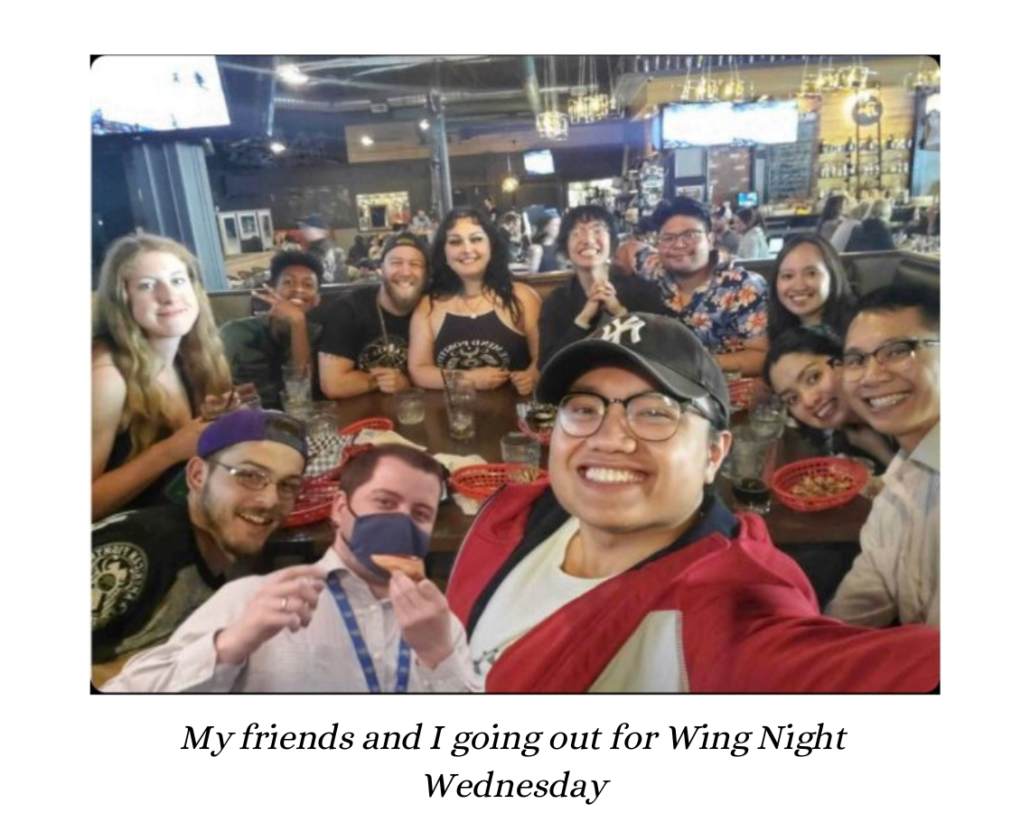 With the great highs, there will always be the lows; days that made me question why I even left home in the first place. Days I felt unsure, doubting my skills while mentally stuck on papers. I feared not being social enough to make new friends. Those days never last though. I had caring relatives that looked out for me while learning the ropes of Canada. My skills, while not the most refined, did show up through my effort. I did make some great friends in Canada. All my bonds support me through rough times and self-doubt. It helps prove to myself that I made the right choice. Moving away does suck at times, but my home isn’t some faraway memory. They’re just a phone or text away (and maybe 13 hours ahead).