I guess the best place to start 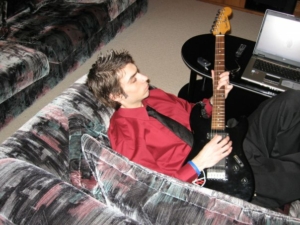 is just saying that I’m the elder millennial on the Students’ Association Executive team, you know with having been born in the 80’s. I still have some of my transformer’s toys to prove this as well.
I was born in a small town in Saskatchewan, and I moved to Red Deer at a pretty young age – when I was 1.5 – 2 years old. Okay I didn’t move; I was just brought along for the ride. Apart from a brief stint in Calgary, during my early twenties, Red Deer has always been my home. In regards to family, I’m the oldest of five, with two brothers and two sisters. I’m also in the weird position of having had three dads – LONG STORY. I met my fiancé five years ago online but not on a dating app, but rather through a blog I had been running at the time. Two years ago, I proposed at the Calgary Airport with a ring pop (don’t worry, I had a real ring). She always thought it would be funny if that happened, so I took the opportunity to do so! I have an interesting and weird love for a lot of the music that came out in the late 90’s/early 00’s, remember Ska? Yeah, we don’t need to talk about that one too much. I spent most of my time listening to bands like, Blink-182, The Deftones, Brand New, Nirvana, Chevelle, and ALEXISONFIRE which even inspired a group of my friends and I to started a punk band in high school – as one would expect we didn’t go far!

When it comes to my schooling this has been a journey. I graduated from Lindsay Thurber Comprehensive HS in 2006. So, my high school experience was nothing but construction. I then went and attended RDC in the 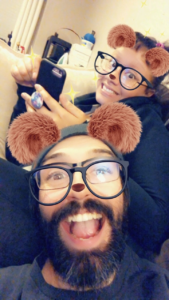 winter of 2007 as an Open Studies student. This didn’t go so well, mostly because I wasn’t committed to the idea of post-secondary at the time. After this I ended up in construction, I guess what happened at Lindsay Thurber had ultimately intrigued me. After working a few years as a “tin basher,” one of the guys that installs the heating in the building, I had gotten discouraged with one, always being cold, and two not having access to the trade program at RDC, so I left construction. Side note: this trade is still not available at RDP, hopefully that changes! After that I got into computers and technology, and I can already guess what you’re thinking, RDP doesn’t have a computer science program. While you are all right in that matter, I went hey you know what computers have the internet and the internet can teach you things. I was doing online classes back in 2010-2011 before it was the norm and before it was cool (okay they sucked then, and they suck now). As a result of this I was able to get a few certificates from CompTIA: A+; Network + and Security +, which allowed me to work in IT for a few years as a help desk support technician and onsite systems installer. Yes, the first thing we ask 90% of the time is have you tried turning it off and then on. After a company downsizing and hitting a wall educationally trying to do it all online, I decided it was time for me to go back to school in-person and give it an honest try.

The fall of 2017 was my first year back in post-secondary, as a university degree transfer student majoring in chemistry. Boy, oh boy, did that first-year rock me hard. Between having to drop out of Chem 212 and getting just passable grades in my other science courses, I ended up taking psychology as a GPA booster.

Well, that may have been the best decision I had made academically. It gave me a new direction that I was interested in, and the material clicked, but more importantly gave me my confidence back!

During my second year I started to become more involved in giving other students a platform to have themselves be heard, in my second year by becoming a member of the Agora Undergraduate Conference and Journal, in addition to being a peer tutor (before the SA had Nimbus!). This then led to me getting noticed by other student leaders who recommended that I join the Students’ Association Council – so I did! Then the opportunity to run for an Executive position became available and again I decided to challenge myself and HERE I AM!

I look forward to the challenges that this role will entail and getting a chance to hopefully leave a legacy for the students that come afterwards!